A few nights ago, I heard someone trying to get into my place. Not entirely shocking given the area I live in (Nice by day, not great by night!). So I decided to get myself a small battery-powered security camera. The Blink XT2 stood out to me, and here it is!

There are mini-reviews in this post, so to save you time, I will be star rating everything like so:

I managed to grab this fairly cheap, given it was Cyber Monday Sales I managed to get 25% off, knocking it down to £75 (about $98). One of the major selling points was the lack of a subscription service, I really didn’t want to go down the ring route of keeping it on their cloud system.

Hopefully, I can keep this localized and set up a guide later down the line on keeping this on my home machine/server.

The actual device itself turned up in no time, thanks to Amazon Prime. I highly suggest getting Prime if you’re into Smart Home Tech 😉

The box was super compact, really really clean and didn’t have a lot of extra stuff you find in other products. The Blink device itself was brand new, no worries of getting a second-hand product and it’s absolutely tiny.

The actual contents of the Blink XT2 were the following:

Example pictures of the Blink XT2

My rabbit decided to leave the cage and jump on the sofa (You can see him at the top). We keep an eye on the rabbit via camera because he’s pretty good at destroying my home.

As you can see, the night vision is pretty good, everything is fairly detailed. There is a click whenever the lens changes to nightvision, but it shouldn’t happen too often.

I have uploaded footage to our YouTube channel but you can see it here too: 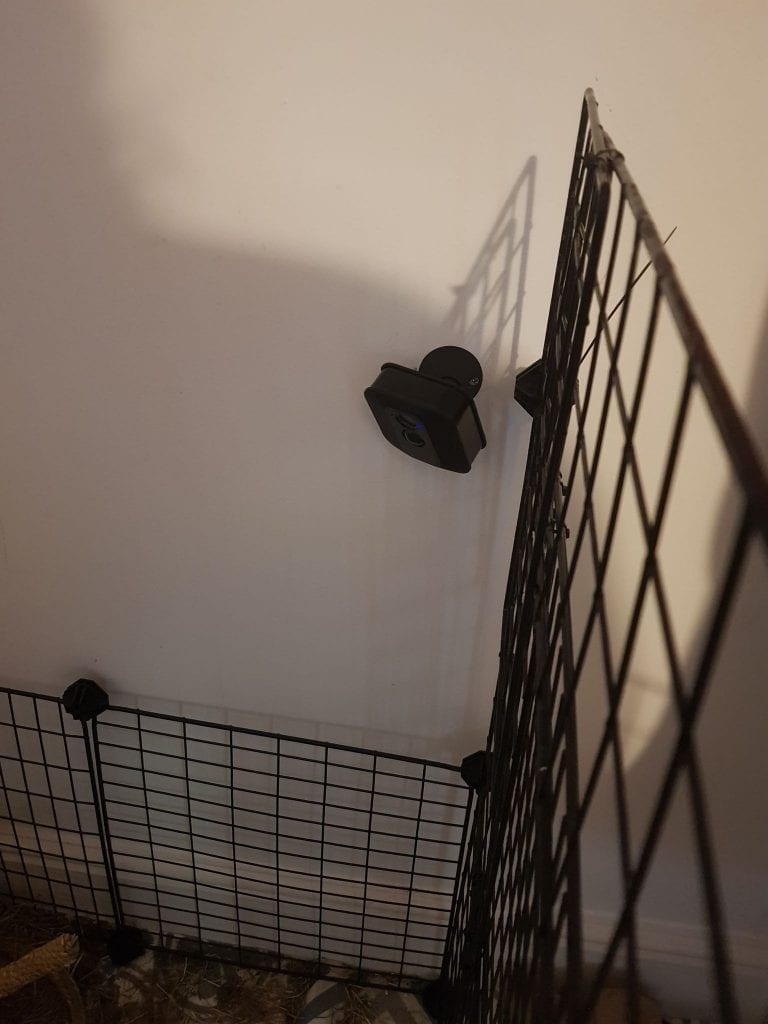 Why I went with the Blink XT2

It’s quite simply down to the price and the functionality, the Blink XT2 offered two-way audio, 1080p HD video display and free cloud storage.

I would really expect 1080p HD with most cameras now, given how far phone technology has come along, it’s also worth noting it has Amazon Alexa integration. Whilst this won’t pair with my Google Assistant, I’m happier with the Alexa integration, to be honest.

Lastly, it’s the Two-year battery life, I really couldn’t emphasis how great this is. I’ll just put it up, leave it to it, and then come back when I’m notified of the low battery life.

What I think about the Blink XT2

It’s been about a week since I’ve set it up, it’s working well, to be honest. I’m going to save you time and right now tell you that I like it. It works as it should, it was super easy to set up, it’s sleek and hides away pretty well.

It avoids the conventions of a standard security camera, which I personally think is great, whilst CCTV can deter theft, it can also cause a better-executed plan (Not that we really see them where I live).

The black colour and rounded edges make it surprisingly hard to see when your lights are off, I have a few of mine tucked away in the most obvious places but cannot be seen when the lights are off.

There’s a mount for it to go on the wall or ceiling, I tried giving the ceiling a go, but it wasn’t for me, I can’t really see this being something that would work for an average homeowner.

If you compare between the Blink XT and the Blink XT2, the biggest perk is the two-year battery life, which is incredibly impressive given the life span of the prior device. I’ll be sure to update this when my battery dies, but it’s barely budged 😉

I can’t comment on the weather-resistance as I don’t use the Blink XT2 outside, I have other cameras for this. It boasts an IP rating of 65, so it’s completely protected against the standard elements; Storms, Wind, Small Debris etc.

Obviously, no camera is perfect. But since having my door somewhat attacked, I want to be able to catch the culprit should something get stolen. But does the Blink XT2 meet my standards? It needs to meet the mark on the video, audio, storage, night vision, cloud storage, AI integration, convenience and most of all, good value!

As mentioned already, the Blink XT2 does have 1080p HD video, which you’d assume you’d get at least in 2019. One of the common issues you’ll find with this is that the scope/field of view isn’t an entire 180 which means you’ll be at a much smaller and focused angle than you would expect.

After doing some research, I found this to be at 110 degrees, I’d argue you want at least somewhere between 110 – 130 degrees. At least you can digitally zoom I guess.

But, more importantly, it works really well and the quality is great. As long as it’s positioned well, you shouldn’t see any issues.

I have to admit, I was definitely taken back when I heard the Blink XT2 had two-way audio. I never really thought the Smart Home hub would get features like this as of standard any time soon. But it is a welcome addition for sure!

If you keep this around the house, you can easily talk to any room should something happen, alternatively, you can scare away any intruders. Which admittedly, I’d like to catch on camera and upload to our Smart Home YouTube Channel (Shameless plug).

The actual sound isn’t too bad, the recordings work well, I’ll see if I can upload some uncompressed examples soon. Honestly, no issues, no crackling, no distortion.

What about the Blink XT2’s Storage deal?

Simply put, I think this is one of the best options out there that’s on the market. Both cloud-based storage and localised storage which is a blessing I think Ring could take on-board.

As of the moment, I’m just using the Blink XT2 free cloud system, however, I will do a blog post on setting up your own backup system from the cloud to your own server or locally automatically.

You can keep footage on the Blink XT2 cloud platform for around a year, which is absolutely nuts in terms of free server space, but it makes sense given they’re managed by Amazon.

To confirm, you can only store 7200 seconds locally on the device which is around two hours of footage, not a problem if you set up an automated system but given there’s nothing out of the box I feel like I have to mark it down for that?

The Blink XT2 and the Amazon Alexa devices work perfectly together, so if you’re using the Amazon Smart Home ecosystem, which I personally use, you’re going to find this device to be great!

You can enable voice commands to send message and voice to the camera.

Sadly cannot do this with any of the other ecosystems such as Google, Apple and Microsoft.

Smart Home Assistance, ⭐⭐ for sure!

Night Vision or barely any vision?

The Blink XT2 uses infrared LED lights to allow for what I would deem as pretty good night vision, there are no real dark spots and it looks phenomenal (better than the colour variants you see online).

It’s worth noting that there is a blue light that comes on when recording, so when I mentioned earlier that it’s fairly hidden, it does come at a price. Although, in this day and age, who doesn’t have weird glowing lights in their room?

One thing I regularly see with issues for Smart Home CCTV is that the detection software isn’t great. Blink XT2 doesn’t have a person or facial recognition, so you’re not going to find this as great as other devices.

This camera doesn’t notify you of when there’s movement, it doesn’t let you know who specifically is on camera and it won’t detect the difference between a car, person or dog.

Is it worth the money?

Yes. At the cheap price, it is most definitely worth the money, you can grab two Blink XT2’s at a much cheaper price and is 100% worth the price given all of the specific points I’ve made above.

If you compare the price to some outdoor camera’s, you’ll realise how cheap it really is, 100% buy this. ⭐⭐⭐

To end this, I’m going to bring in some extra features onto the table which I don’t think their own category but definitely needs mentioning.

There is a built-in temperature sensor, which provides an extremely accurate reading.

These allow you to specify to the Blink XT2 where to focus/record, this should really be a standard across all cameras so I’m really happy they implemented this.

It’s great for allowing only focus recording when someone comes onto your property!

I’m mentioning this because it’s an absolute blessing that the device is charged via a MicroUSB cable, I’m sick and tired of having 100’s of different charges for so many devices.

This is a little tip I found from a YouTube video and was a pretty cool way of keeping your camera charged regardless of the amount of motion you see. You can purchase a solar panel USB kit These are surprisingly cheap and would actually save you money in the long term.

Solar Power CCTV works for not only the Blink cameras but also Ring devices and many other off-brands. It’s definitely worth checking these out for a full lazy system / set up.

Here are some of my picks for the Solar Panel choices (Due to their size):

Ring Solar Panel for Spotlight Cam Battery
Get it here 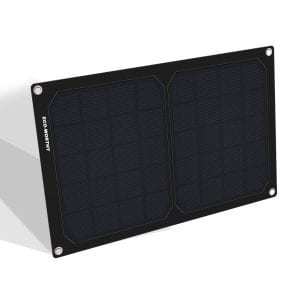 How do I use the Blink XT2 Desktop App?

Blinks downfall comes from user experience and how to set up the system to access your cameras easily without your Smart Device. One of the older solutions was to export to a YouTube Channel which had only private videos, but that isn’t exactly comforting from a security stand point.

The best solution I found, was to use an Android Emulator called BlueStacks and install the app that way. I go into more detail on this in my blog post here.

If you need a small CCTV camera but don’t want the mess of cables and making sure it’s all on a specific network with repeat subscriptions, the Blink XT2 is honestly amazing.

The faults I found are outweighed by the positives and it’s just such great value for money, we really have hit that era of cheaper home security.

You should get the Blink XT2 if you meet the following criteria:

When you shouldn’t get the Blink XT2: