Technology is moving forward and this is one of the first devices with Alexa built-in. We should definitely expect more in the future; Echo Shower, Echo Toilet Seat, Echo Pillow, Echo chair. The list is endless!

What is the Echo Flex?

The echo plug is a great way of putting the Amazon Smart Assistant in with another device, for example, the Amazon Echo Flex has a USB port at the bottom which is perfect to charge your phone with or even add the night light and motion sensor addition they have (I’ll go into that later).

It’s worth noting, that these devices do appear to use the same ‘bandwidth’ as other devices, so if you do have one in every room I’d highly suggest checking out my article “What internet speed do I require for a Smart Home?“. 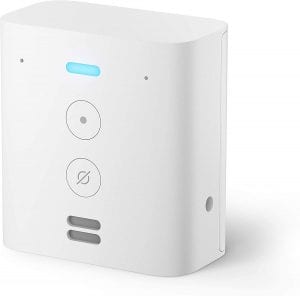 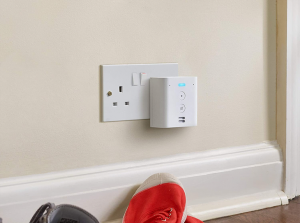 Does the Echo Flex have normal plug sockets?

The Echo Flex doesn’t have a plug out of the box unfortunately, I think Amazon figured that most people plug in usb devices so this would be their ‘killer’ for this. Although, if you’re not fussed about an Amazon Echo device but want usb ports and plugs, check out this.

Can I use an external speaker with my Echo Flex?

Yes, the Echo Flex comes with a 3.5mm Audio Output, so you simply need to plug in a speaker with a cable like this. Once done, all audio will come out of that speaker (But voice still goes into the base device).

Personally, given that this is on the wall, I can’t see a useful way of handling this as it will then be multiple devices, which takes away from the main direction of having this device. 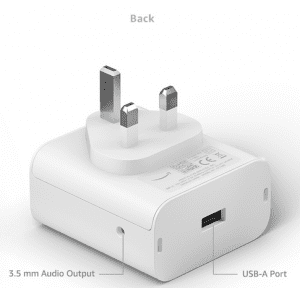 What Echo Flex extensions are there?

As of writing this,  there are two third part extensions that work out of the box with the Amazon Flex. These are: 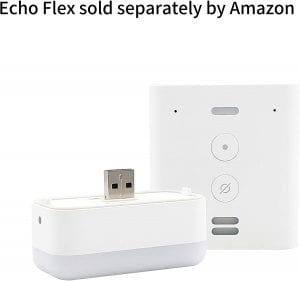 This nightlight is certified by Amazon and is super easy to install. Simply plug it into the bottom of your Echo Flex and it should start working within 20 seconds.

The night light has some cool features, for example, the night light will turn on automatically when the room is dark. You can also set routines in the Alex app to make sure the light doesn’t come on at certain times and to change the lumens + colour at specific times.

Due to it’s flexibility, It’s a pretty good extension, the main downside being the price. 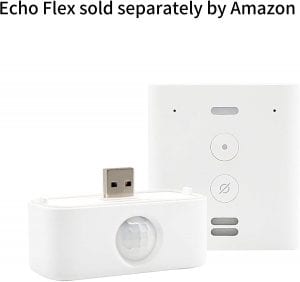 This motion sensor is exactly as it says, it triggers a set of routines once the PIR (Passive Infra Red) is triggered.

Once plugged in, simply created a routine and you’ll be able to set it to trigger when the motion detector goes off.

You can also lower the sensitivity of the motion sensor (If your pet keeps triggering it), simply unplug and plug the device back in 4 times in quick succession and the Blue LED will then flash slowly to show it’s starting up with a low sensitivity.

Can the Echo Flex play music?

Yes, but that doesn’t mean you should. The Alexa voice is crystal clear, however, music comes through at very poor quality, the Echo Flex uses a 0.6 inch speaker, so it’s not the best quality on the market.

In such a case, the Echo Dot is a better option for playing music through an Alexa device. This should be seen as a cheaper alternative to an Alexa device if you already have a very Amazon Echo devices.

What is the difference between the Echo dot and Echo Flex?

The Echo dot should stay as your main Amazon Echo device, if you’re looking to listen to music, have a full Amazon Experience and have it on show, definitely go with the Amazon Echo, if you want any Echo devices in a movie room, hallways etc, the Echo Flex is the better choice.

The Echo Flex is fantastic at saving space and working with function over form, The flex itself is an incredible bit of kit due to the motion sensors as well. You can use it to turn on/off lights between certain times without using your voice. For example, it’s 2am, your family is asleep, you need to go to the bathroom, simply walk past the sensor in your landing and your Philips Hue lights come on dimmed! Perfect!

If you’re looking for a new Amazon Echo  device to put around the house, you need to  take into consideration the size, the features and what your end goal is. If you’re looking for something to automate your life through motion detection and you’re not fussed with amazing sound quality, definitely go with the Flex.

If you’re a Casual Smart Home user, the Flex probably won’t fit your needs. If you’re looking to automate a lot of your life and make things easier, the Amazon Echo Flex is probably what you need!

You can purchase motion sensors for the Echo Dot, but they don’t fit as well and aren’t as small in terms of space taken.