Everything you need to know about Vizio

Every TV you’ll see on the shelves is now a ‘Smart TV’, but how many of them are actually Smart and why are Vizio models everywhere?

What is a Smart TV?

Smart TVs took the world by storm, all Dumb-TVs can now be converted to a Smart TV easily and you’ll struggle to find a Dumb TV on the shelves now.

In today’s day and age, Televisions require the internet to stream Netflix, Amazon, Hulu and more.

Lots of TVs allow for 4K Streaming with Netflix and other services like Amazon Prime.

Smart TVs connect to the outside world much like your Smart Phone; offering internet connectivity, voice control, assistance, recording and a whole array of entertainment options.

What is a Vizio TV?

Vizio TVs were all the rage in 2016, there was a lot of buzz about the budget Smart TVs.

Vizio TVs since early 2020 have actually made a lot of improvements to their software which puts this on a tier nearly as great as the Amazon Firestick (Not the shoddy Amazon Prime App).

The Vizio SmartCast software really does make this TV fantastic, it’s no longer a cheap-feeling Smart TV which regularly crashes and is definitely worth investing in if you’re looking for a cheaper Smart Home.

Is there a Vizio App Store?

Whilst this does change from Vizio TV to TV, the general rule across their OS matches the likes of WebOS and Android by making everything very uniform and fluid.

Following these steps, you can add additional Apps to some Vizio Smart TVs

If your Vizio TV is from 2017 follow these steps:

If your Visio TV was from 2016 – 2017 and is branded a VIZIO SmartCast HD Television, you will not be able to install apps, however, you can cast directly from Chromecast on specific apps installed on your Smart Tablet or Phone.

If your VIZIO SmartCast 4K UHD TV was released between 2016-2017 or a SmarCast TV from 2018 onwards, you will not be able to additional applications.

There will be default applications but you will need to use a Chromecast-enabled app to cast to your television from a Smart Phone, Smart Tablet and even Apple Devices with AirPlay.

Casting to your Vizio SmartTV from your laptop

Vizio allows you to use a piece of software called Miracast, this is natively supported by various different operating systems, which include Windows 10 and Windows 8.1.

The easiest way to check this is to click on the Windows Notifications button, expand and then click Connect. 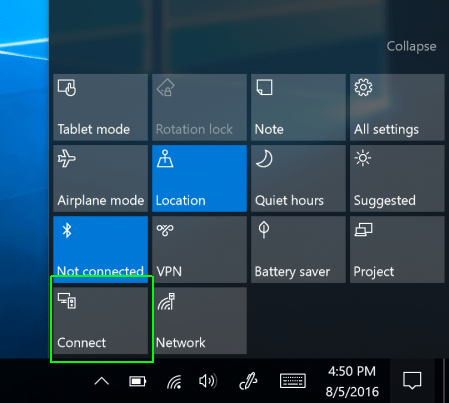 I lost my TV Remote!

Not to worry! Vizio using Smart Technology and working over WiFi means that you can use your smartphone to control your Vizio Television remotely!

You can download a remote app called “VizControl” which allows you to control your Vizio Smart TV, this is supported on all phone devices which uses WiFi. Simply download via the Google Play Store or Apple App Store!

Is your Vizio TV looking blurry despite being a 4K compatible TV? There are a few reasons for this, which range from not paying for 4K options on your favourite streaming service to not using the 4K HDMI port.

You should be able to see a label on the back of your Vizio TV which identifies which ports are only 4K compatible, this changes from the 4k Vizio e series to the 4k Vizio m series.